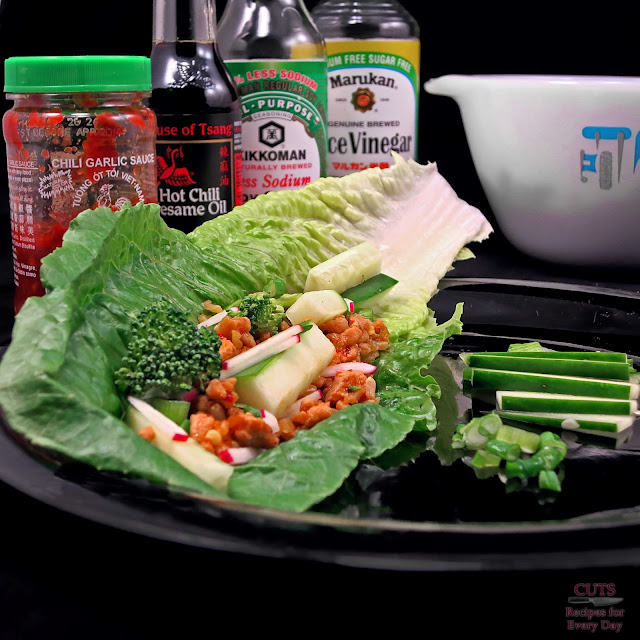 Move over bread.  There's a new sheriff in town.  Lettuce tell you about it.

I'm so, so sorry.  It's way too early to be writing this.  I'm delirious.  I'm so delirious, it took me about 2 minutes of staring at the word delirious to spell it right.  But that's exactly what this dinner is perfect for - days where you're just deliriously tired, have a fridge full of random veggies and a few Jurassic-sized leaves of lettuce you need to use up, and/or have a total of 20-25 minutes to make your food, eat and get on with your day/evening.

This past week, I was on my own variation of the CLEAN diet - just a detox diet that cuts out red meats, gluten, dairy, preservatives, etc. for 7-21 days to help reset the system (again, my own variation - you don't have to buy anything from this particular program - such as the shakes, or even his book, to follow through on this concept). It wasn't my first time trying this diet, but for some reason, this time around, I had so much energy within just a couple of days, I've decided to stick to it for 3-4 days of the week - every week!

In any case, while I  was on this, not only did I decide it was time to try making lettuce wraps (really, it's the only way to live without bread for a week), I found new Indian sauces using only veggies and lime juice, I rediscovered my love of beets, used chickpeas for sauces and as a thickening agent - really, I discovered - and in some cases, rediscovered - a whole world of food.

I'll share some of that, some healthier desserts, etc. in the weeks to come - this blog ain't going totally healthy - that would just bore the hell outta me, but you can expect a wider variety of healthier foods in the weeks and months to come.  Let me know if you have any thoughts - I'm ALWAYS looking for inspiration!

It'll take less time to make this recipe than it took you to read this tripe - get on with the recipe already! 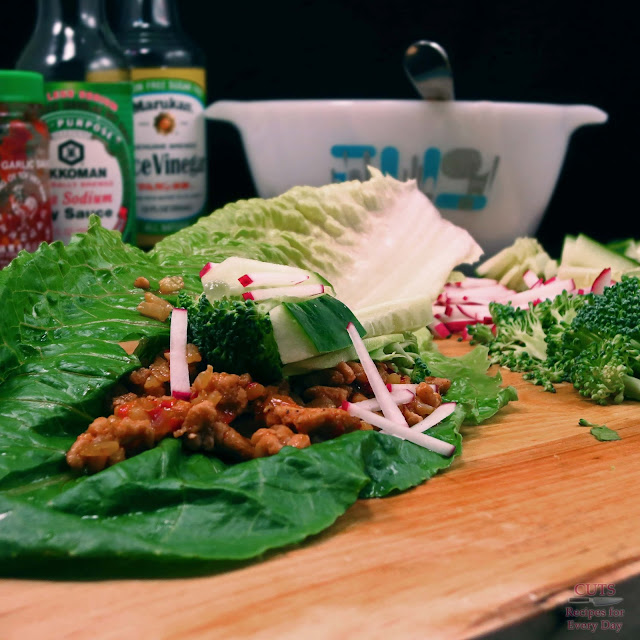 2 tsp cooking oil (I used coconut oil)
1/4 onion, diced
1 tsp Sesame Oil (Hot chili sesame oil if you have it)
3 tbs chili garlic sauce
1 tbs rice vinegar (or white vinegar)
1/8 cup soy sauce
1/8 cup broth (I used duck.  Because that's what I had lying around.  I know, I'm weird)
3/4 lb ground chicken, pork or beef
Raw veggies of your choosing - we chopped up a few heads of broccoli, cucumber and radish
1 bunch (about 8 leaves) of a crunchy lettuce - iceberg works great, but I was in the mood for something dark, green and leafy, so I used romaine 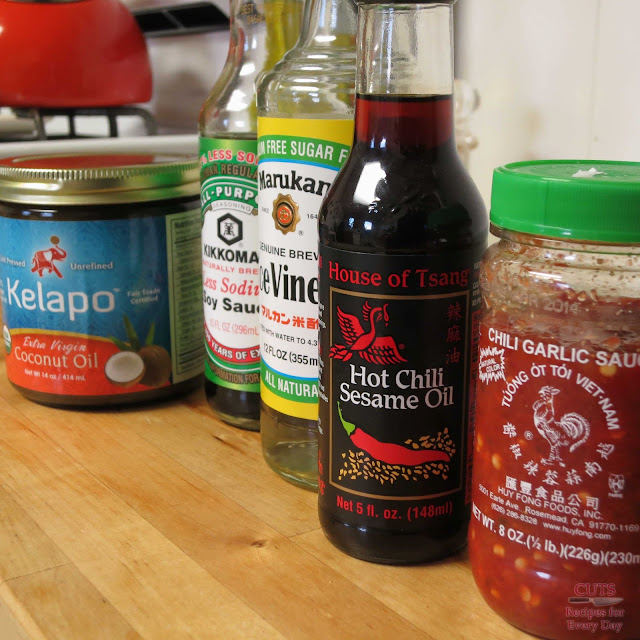 1.  Preheat two skillets to about 3/4 heat and add the cooking oil - about 1-2 tsp per skillet
2.  Add the diced onion to one - this will be our sauce.  Cook until the onions are translucent. 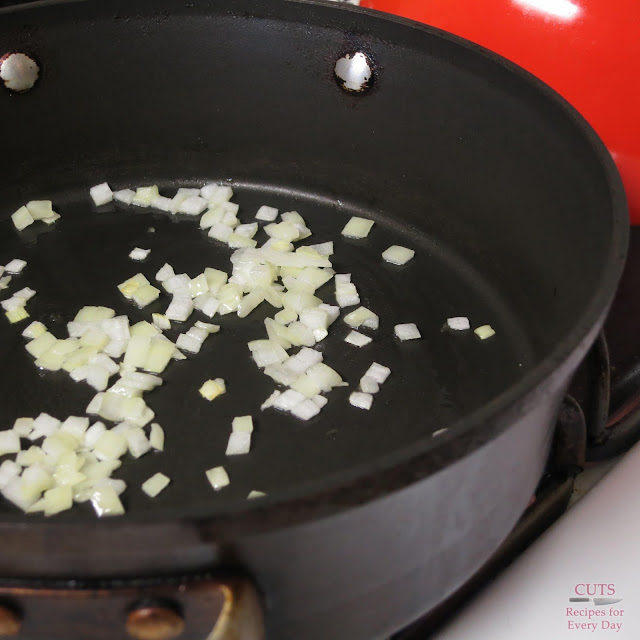 3.  While that cooks, start the - uh - meat...on the other skillet, scramble, and cook until ALMOST done - keep scrambling that meat.
4.  And while THAT cooks, add the broth, sesame oil, chili-garlic sauce, vinegar and soy sauce to the skillet, stir, bring to a boil, then let simmer for about a minute
5.  Once that meat is, like, seconds from being done (you see I have a bit o pink still left), move the sauce over, and let it simmer with the meat for a few minutes.  Imagine - tacos, only less Mexican food and more Asiany food 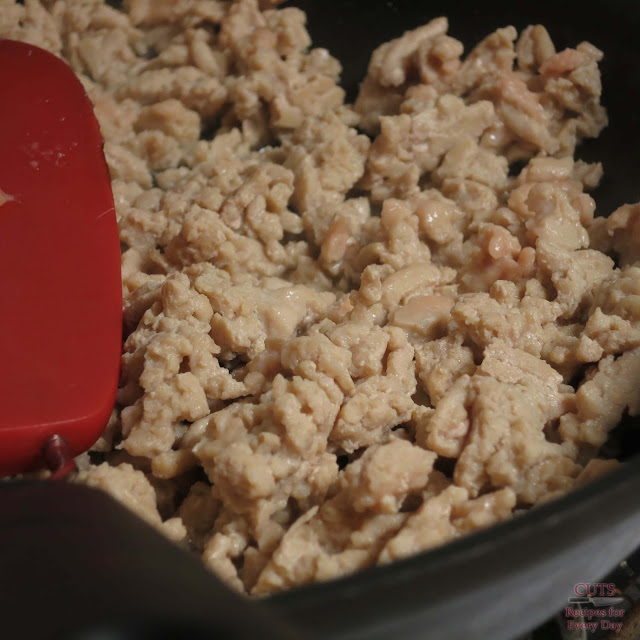 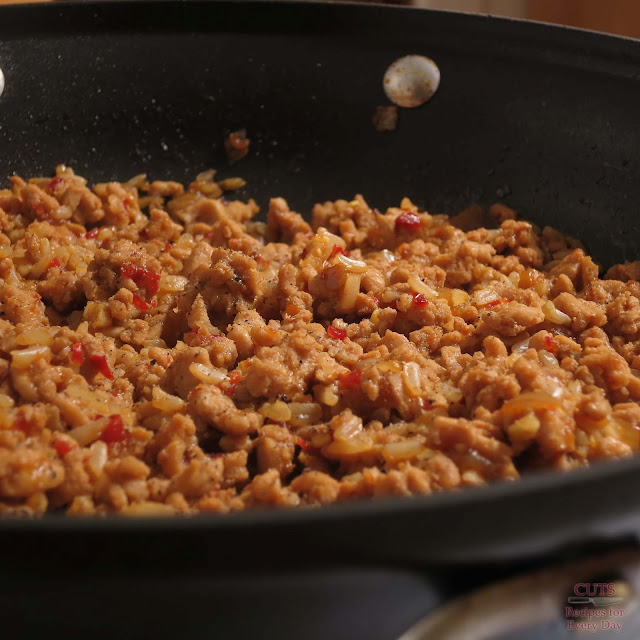 6.  Round up your veggies, your meat and any additional condiment you want.  We used hoison, because hoison is spiked with an addictive drug that fills the pleasure center of your brain like a shallow well during monsoon season.
7.  Now - simply stuff that lettuce with the meat and veggies just as you would a soft taco and roll it up. 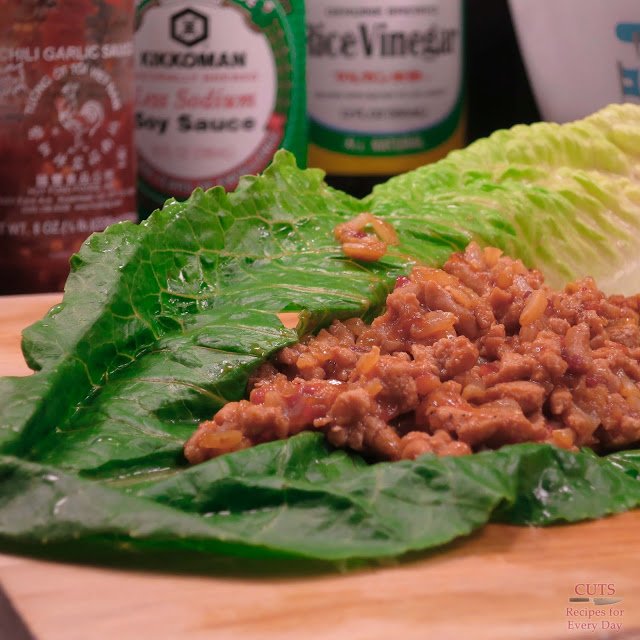 Simple, quick, delicious and healthy - it was kind of a throw-away dinner that is quickly going to become a regular in this house.

Take some pics, send'em to me, I'll post'em - we'll all revel in the wonderful deliciousness that is food.  See you on the Facebook page! 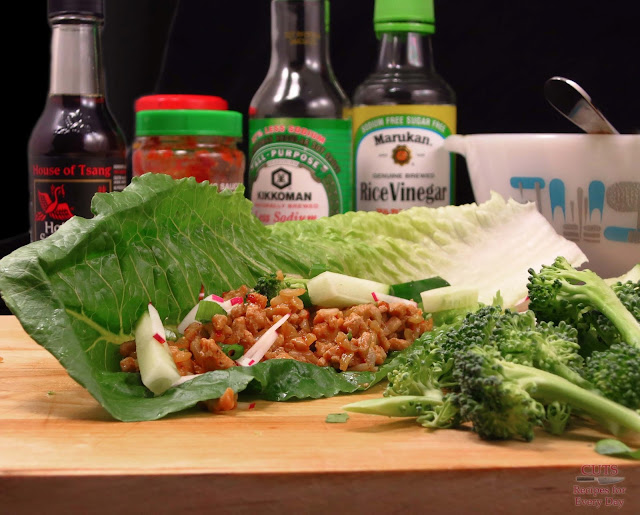 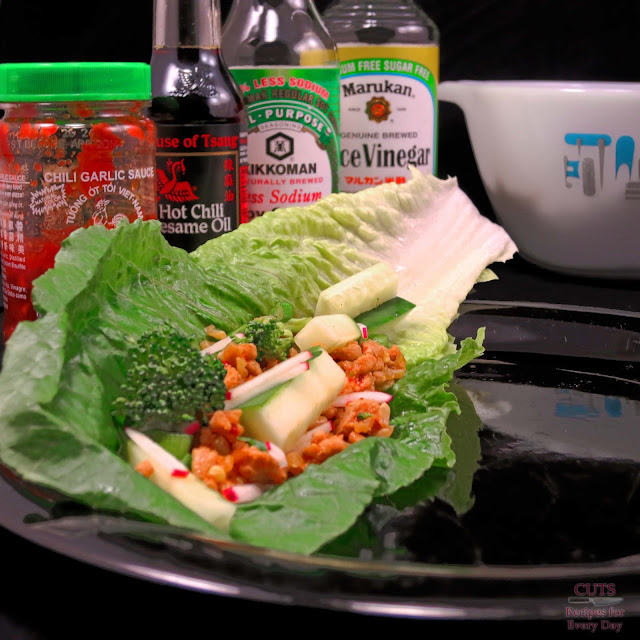