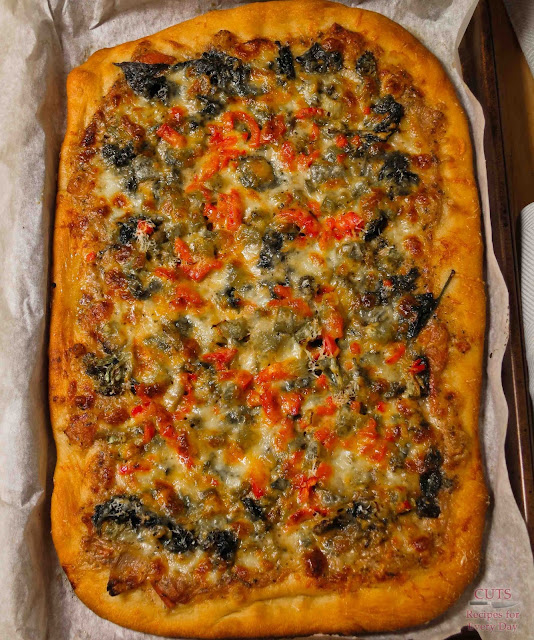 Making a sauce shouldn't be daunting...

I mean, cooking in general is daunting, isn't it?  So many people area afraid of making their own sauce or frying their own chicken because - well, I'm not sure.  What's the worst case scenario?  The meal tastes like road kill and that frozen dinner you were going to nuke or that take-out pizza you were going to order actually becomes a reasonable option.  Nothing gained but a bit of experience - sure - but nothing lost besides a bit of time and a few ingredients.

Cooking is like any other hobby or skill - it takes a bit of practice (I definitely consider myself to be an amateur, so trust me, I empathize).  But unlike origami or - I don't know - puppeteering - it's one of the most necessary skills you'll ever develop!  You'll always need to eat...if you have a family, or friends who visit regularly, and you live somewhere you can't grab a bite at any time of night, you need to be able to throw a couple eggs on the skillet and make them - you know, edible.  So yes, cooking is daunting, and you may fail the first few times you make something - but when you succeed, the payoff isn't as much art as it is sustenance. 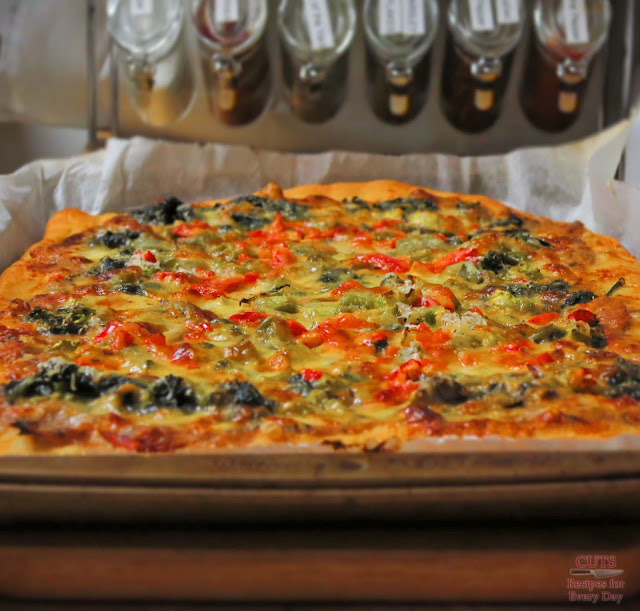 Sauces, in general, can be the same sort of scary.  When you watch the these cooking shows on the tube - Cook or Die, or what-have-you - you always see these elaborate, fancy sauces that need to be timed perfectly or they erupt in a fiery, magma-spewing mountain of brown, crusty burnt carbon.

But, not all sauces are like that.  This one you can make in a matter of minutes while you prepare the rest of your meal, and not only is a simple, it's delicious, and you can use it as a base for any number of flavored, quick and easy sauces! 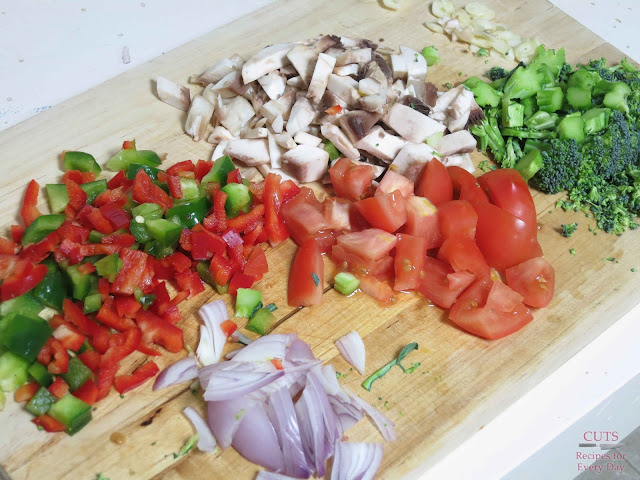 First off, if you aren't going to make the dough yourself (I didn't this time), don't go buy that tear-open-and-go, half-cooked crust stuff - go to the bakery section of your local market or a local bakery, and buy the  dough made that day.  From there, if you want to freeze it for a few days before using, that's fine - just dodge those preservatives or that stale, tasteless ready-to-go, half-cooked dough.  Ugh. (not that I have a hangup or anything).

1. Toss just a touch of olive oil in a small pot, followed by the tomatoes, and sprinkle just a little salt over it - let it sit until the tomato juices start to run.

2.  Turn the heat up to about 3/4 high, and add the minced garlic and shallots - this is the base for your sauce 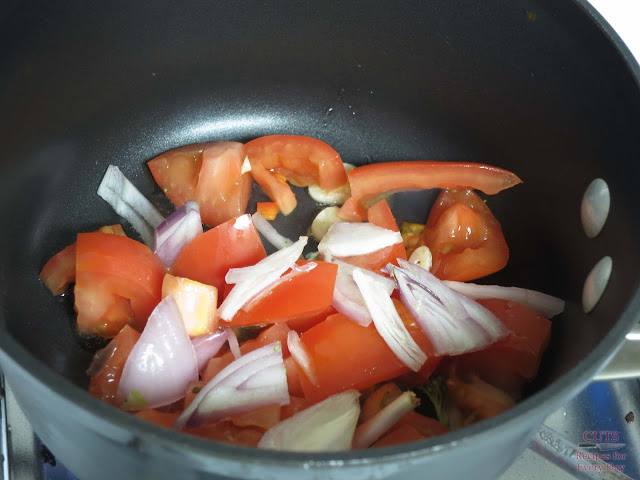 3.  When the onion becomes translucent and the garlic becomes fragrant - just a few minutes - add the Italian seasoning, then the water, a touch of salt and pepper, and let it simmer (NOT BOIL) until the water reduces by half

4.  Add the wine, and again, let it reduce by about half

6.  Add the half-portion of parm mentioned before, and stir until it melts.  If it needs thickening, add a pinch of flour and stir as it cooks in


Preparing the Pizza Dough and Veggies

1.  Preheat the oven to about 400.  Roll out the dough on a pastry board or unfinished wood cutting board or butcher block - what have you!  This isn't an exact science, so I always water and flour on hand to work out any stretching or tearing issues

2.  Line a baking sheet with parchment paper and CAREFULLY transfer the rolled out dough on top - again, you'll probably need to fix up the dough once you transfer to make it fit correctly

3.  Rub the dough with olive oil to help it brown nicely, and season if you want with Italian seasoning, salt and pepper, additional cheese - whatever you prefer!

4.  Saute the veggies on medium - medium-high heat - start with the mushrooms, move on the the spinach, then briefly add the broccoli to keep it from becoming too mushy.  I prefer my peppers raw when they go in the oven, but this is totally a matter of personal taste. 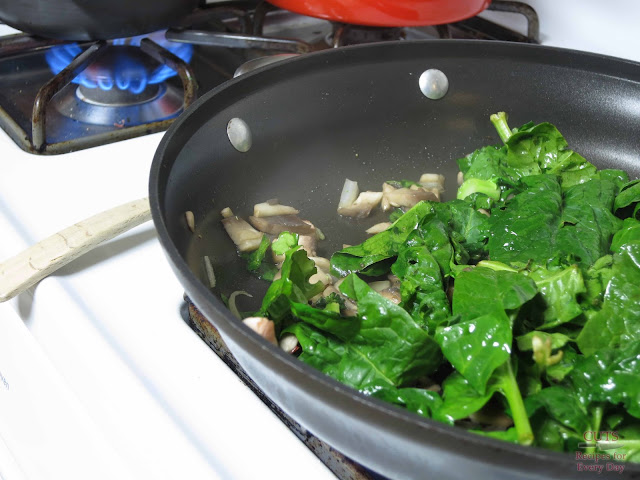 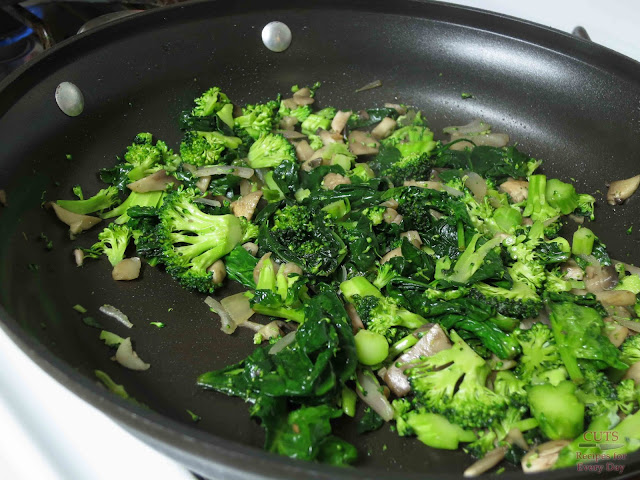 5.  Take the sauce you made and, moving a spoon in a circular motion, spread the sauce evenly over the dough 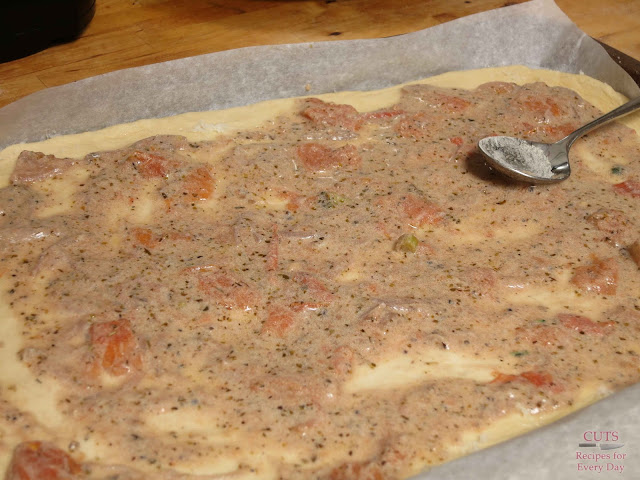 6.  Add your veggies, layered as you prefer, then cut your mozz into bize-sized pieces and drop them evenly over the veggies. 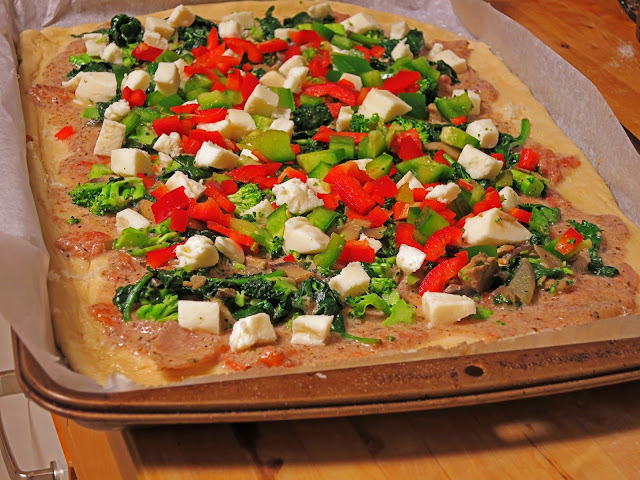 7.  Top with the remainder of the parm to create that pretty golden brown crusty layer on top, then toss it in the oven for 20-30 minutes, or until it looks something like this: 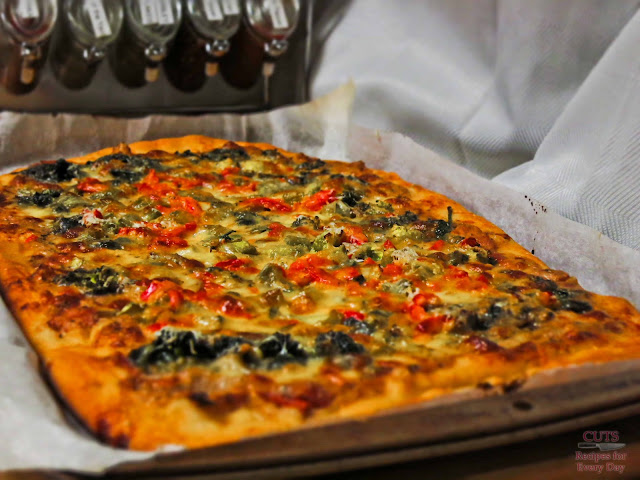 That's it!  The whole process takes less than an hour, and can be done even quicker if you have someone handling the dough while you make the sauce and the veggies...it's delicious, and it feeds the two of us for a dinner and TWO - that's right -TWO lunches.

As always, I'd LOVE to see pictures on www.facebook.com/cutseveryday - they just make my day.  :) 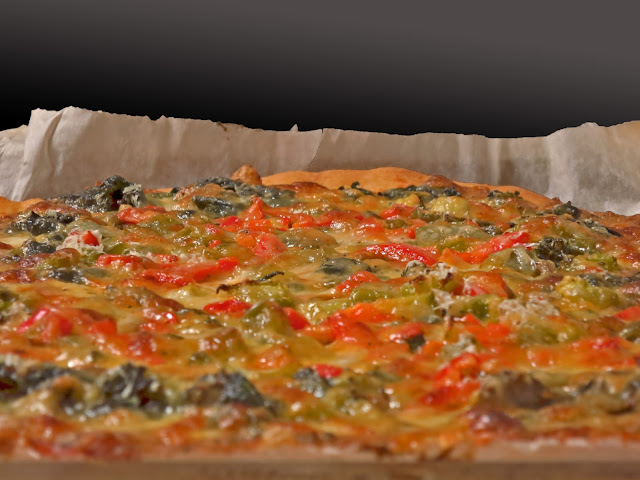