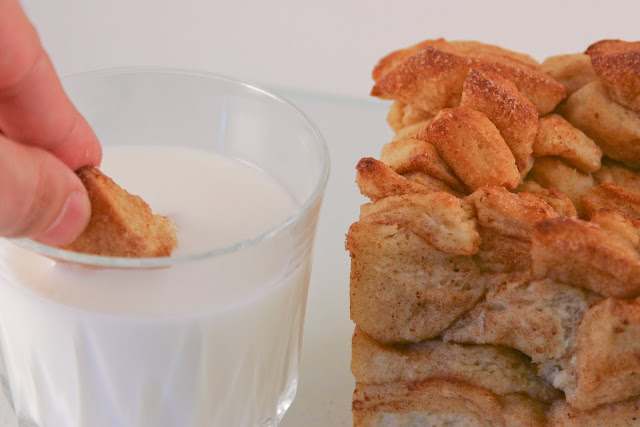 Two months ago, I had never made bread.  I had never shoved my hands into a batch of wet flour and seasoned it, twisted it, folded it to my whim and personal tastes.  I didn't know why yeast breads needed to be kneaded, or thought why cracker dough did not.  I guess I was afraid of what Frankenstein-esque abominations might evolve from my oven.

Of course, there's nothing to fear, really, but that fear of failure - even with nothing at stake, can be debilitating.  It's simple things like this, making an excellent loaf of bread, taking a decent picture, running more than a mile without collapsing - that remind me even the smallest task, even those I think I'll fail at, should be attempted.  Chances are, I'll at least enjoy the challenge, and the worst case scenario is more likely to be finding out I don't like something - at least more likely than the Frankenstein monster jumping from the oven.

Well, this loaf certainly looks like it has bolts protruding from its neck, but I don't plan on chasing it with torches and pitchforks - though the smell of this coffee cake-like bread drifted so far into the neighborhood, I'm a little concerned the townspeople might come chasing after ME if I don't share.  So - here it is! 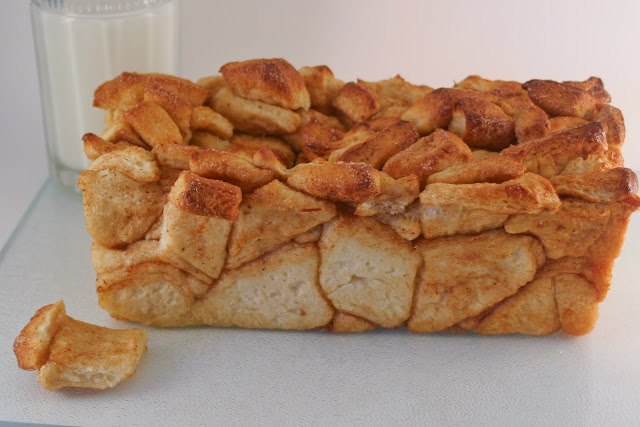 1. In a large bowl, mix the bread flour, 1/4 cup sugar, yeast, and salt.
2. In a small separate bowl, beat the egg yolks thoroughly
3. Place 4 tbs of butter and milk in a small pan, and set to medium heat.   Once the butter melts, remove from heat, mix in the vanilla and water, then let sit for about 5 minutes 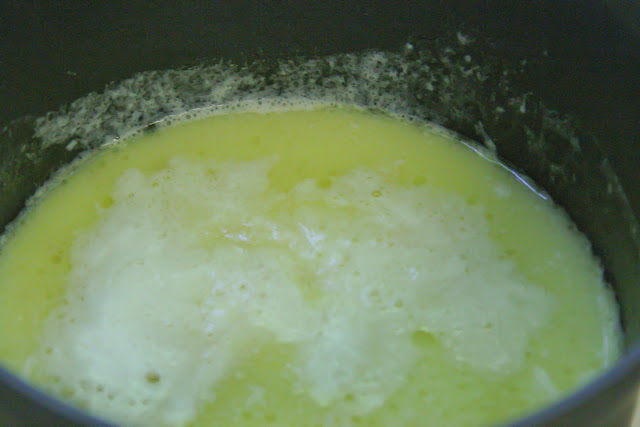 4. Pour the milk mixture into the flour mixture and mix until the liquid is full absorbed.  Add the wheat flour and the eggs.  Mix until a relatively sticky dough is formed.  You may need to add more flour or water to get a good consistency.
5. Lightly oil the walls of another large bowl, place the dough in it, flip it so it's coated in the oil, cover with a clean towel, and let sit until it doubles in size, about an hour.
6. About 10 minutes before you're ready to return to the dough, melt the 4 tbs of butter on medium heat and cook until slightly browned.  Stir and lightly scrape the bottom of the pan with a wooden spoon. Also, mix the nutmeg, 1 cup of sugar, cinnamon, in a small bowl.
7. Punch the dough down, knead it a bit, tear off half of it, place on a lightly floured surface, and roll it out as thin as you can make it.
8. Brush the dough with the browned butter, and sprinkle half of the cinnamon mixture over it - make sure you have enough for the other half of the dough.
9.  With a pizza cutter,cut the dough into 1" squares - about.  There's no need to be clean with this, since the bread looks messy anyway. 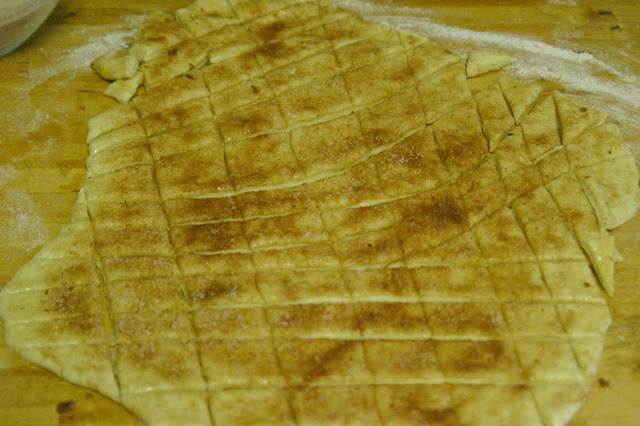 10. Lightly oil a bread pan, tip it on its side, and start stacking the pieces seasoned-side down (see blow).  Try not to over fill the pan - the dough will rise again, and if the pan is overstuffed, pieces will fall out while baking. 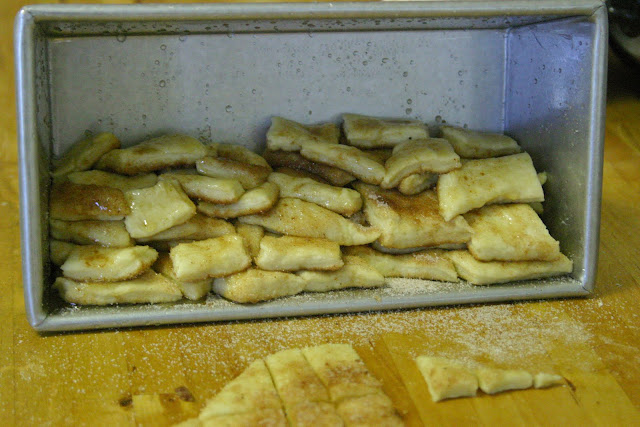 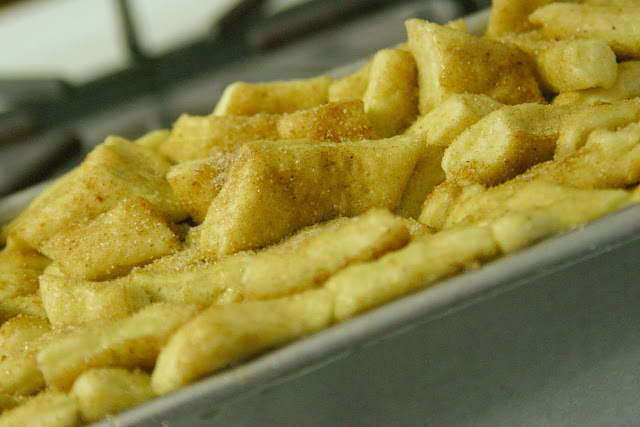 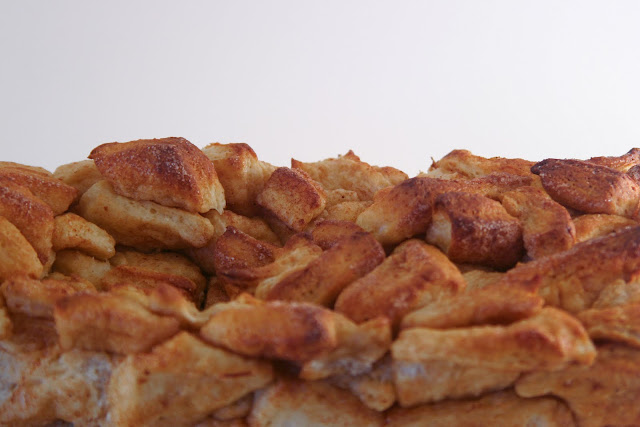 13. Let cool for about 20 minutes, then carefully let the bread slide out of the bread pan.  It's made to pull apart, so go easy on it! 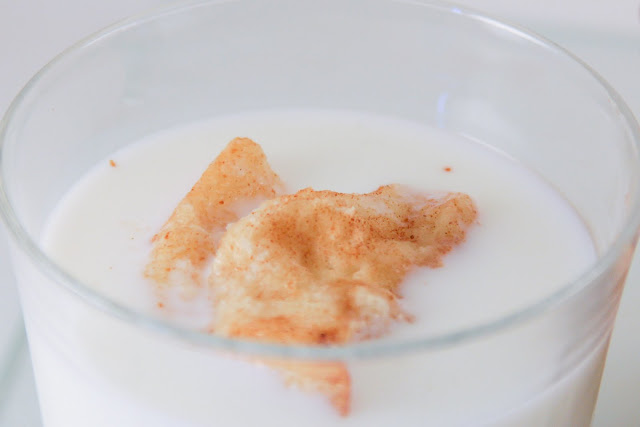 Questions?  Additions?  Comment below, or email CutsEveryday@gmail.com
Posted by CutsEveryday